Lawn Tractor Repair Dot Com is currently in the early stages of its existence and is only a one person operation at this point in time, being ran solely by Carl Lusby.

Carl has an extensive history of successfully diagnosing and repairing a wide variety of equipment and machinery, which he has always had a natural talent and aptitude for, whether it be, mechanical, electrical, hydraulic, pneumatic, gasoline, diesel, or propane. He is not one to blindly throw parts at something in hopes it will fix the problem like so many other mechanics and repair technicians do. He has always been one to thoroughly analyze things and determine what exactly the cause of the problem is and then proceed with an effective solution to the equipment failure.

You can be confident that Mr. Lusby will provide you with effective solutions and repairs on your lawn tractors and whatever other equipment you might have that you would like to have him work on or take a look at to see what your options may be.

Carl Lusby worked 2 years for ABC Rentals of Everett, WA in the late 1970s and then off and on until the business was sold in 1985. He was his employer's favorite equipment mechanic to send out into the field to do repairs on his rented out equipment, because he knew that he could always depend on Carl to get it going again. He was always very impressed with Carl's attention to details and his skill levels and abilities.

Most every company, Carl worked for before going to work at ABC Rentals, always had some kind of equipment or automotive repair work for him to do for them. Whenever he worked in a shop that had old timers who were professionals in the field, he always took full advantage of every opportunity that he could to learn all of their tricks of the trade.

Carl worked part time for Pacific Rigging of Mount Vernon, WA from the early 1980s to the mid 1980s working on logging trucks, Skagit yarders, automobiles, and chainsaws including gasoline and diesel engines. He also did splicing of steel logging cable. During the same time frame, he also did the same kind of work for JCL Logging, except for the diesel engines and yarders.

Carl worked 4 years for Dri-Eaz from the late 1980s to the early 1990s when they were still located in Mount Vernon, WA. He did maintenance and repair work on their forklift, air compressors, and trucks as needed and was their main forklift operator and truck driver.

During the early 1990s, Carl revived several dead forklifts for Sea Dog Corporation of Everett, WA that they had inherited in a purchase of a facility as well as did repair work on farm tractors, farm implements and light trucks for them.

Carl spent the mid 90s getting his electronics degree at Skagit Valley College in Mount Vernon, WA and then went to work for Warren Performance Packaging in Council Bluffs, Iowa as an industrial Plant Maintenance and Repair technician, doing maintenance and repair work on their buildings, air compressors, and installing and replacing electrical systems that were 3 phase and up to 480 volts, after which he spent the next 3 months working on General Electric train locomotives as an electrician as well as working on the large diesel engines in them.

After working on locomotives, Carl spent the next 2 years working as a mechanic for a forklift and equipment dealership, Midlands Rental & Machinery Inc. in Omaha Nebraska, before relocating back to Washington State. While there, he rebuilt forklifts from one end to the other and also did major and minor repair work to whatever other kinds of equipment and machinery that came in through the door. The service manager was always very happy with Carl's quality of workmanship and attention to detail and in his opinion, Carl could fix anything.

After moving back to Washington State, Mid Columbia Forklift Inc., of Pasco, WA, put Carl right to work. After being there for 2 weeks, they ran out of enough work to keep Carl busy. Carl asked them about a scissor lift they had sitting in their shop that he never saw anyone else working on. The service manager told him that it had been there for over 2 years and that they had put over 500 man hours into it in an attempt to get all of the systems in it working without success. When the service manager had tried his hand at it, he had disconnected all of the electrical from all of the systems that had been working to where nothing was working on it when Carl took that job on. Carl had all the systems in it functioning on his 4th day of working on it with that service order finally being completed. While there, they put Carl out on the road with a service truck because he knew and understood all of the equipment so well and successfully repaired whatever his hands touched. Carl had to unfortunately leave there to look after his elderly and ailing father in Sedro Woolley, WA.

Carl spent the next 10 months working on large farm tractors for Farmer's Equipment of Burlington, WA and then as a car, truck, and RV mechanic for the following 4 years for Gateway Auto Center of Mount Vernon, WA. After leaving Gateway Auto Center, he went to work for Sears for over the next 10 years as an equipment field service and repair technician, working on lawn tractors, lawn mowers, rototillers, air compressors, table saws, gas barbecues, and micro processor controlled exercise equipment, serving as many as 5 counties. While working for Sears, Carl successfully made repairs and adjustments on lawn tractors that fellow technicians and other repair shops had failed to make and quickly became a favorite among the customers who he served because he always fixed the problems that no one else seemed to be able to and he always took time to explain things to them and show them what their options were.

Carl has since worked as a field generator repair technician on automatic standby generator systems for Arlington Electric of Arlington, WA.  He has also since successfully revived a dead bulldozer, farm tractors, automobiles, and buses that had been sitting for a very long time that others had unsuccessfully tried to get running, as well as lawn tractors and whatever else that came along his way whether it be mechanical or electrical, or some aspect of the building construction trade and always with successful results.

Equipment Carl has diagnosed and repaired

955 Caterpillar track loaders with both bucket and log forks

Back To Top Of Page 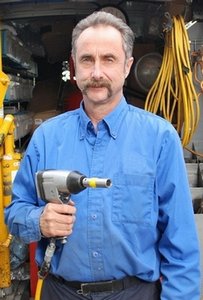 Home Service Procedures Mission Statement About Us *** More To See ***